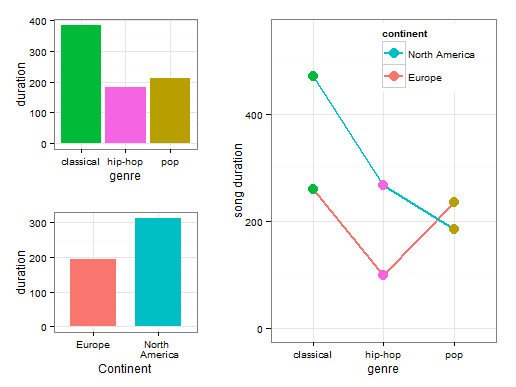 The visualization above, contains 3 parts. The left top visualization contains the main effect of genre on song duration. As you can see, the pop and hip-hop genres are fairly similar to each other but a classical song has a much longer duration on average. This is where the significance of the genre variable comes from. The left bottom visualization contains the main effect of continent. As you can see, North American songs have on average a longer duration than European songs. However, if you look at the right most plot, you see that this pattern holds for North American and European classical and hip-hop songs but not for pop songs. European pop songs have a higher song duration than American pop songs. This is exactly what is meant with the statement that the effect of either factor on the response variable is not the same at each category of the other factor.

In R, you include an an interaction term in your model by putting a colon between your first and second variables, like so:

You would then have to add this term into your anova function like so: