In the previous exercise you made a fancy plot of the tree that you've learned on the training set. Have another look at the close-up of a node: 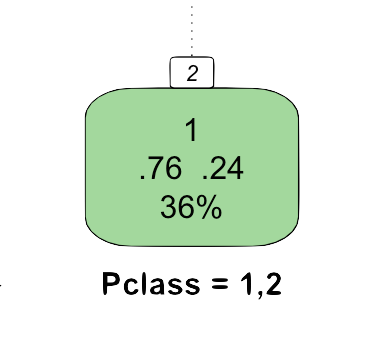 Remember how Vincent told you that a tree is learned by separating the training set step-by-step? In an ideal world, the separations lead to subsets that all have the same class. In reality, however, each division will contain both positive and negative training observations. In this node, 76% of the training instances are positive and 24% are negative. The majority class thus is positive, or 1, which is signaled by the number 1 on top. The 36% bit tells you which percentage of the entire training set passes through this particular node. On each tree level, these percentages thus sum up to 100%. Finally, the Pclass = 1,2 bit specifies the feature test on which this node will be separated next. If the test comes out positive, the left branch is taken; if it's negative, the right branch is taken.

Now that you can interpret the tree, can you tell which of the following statements is correct?