As we saw in the last exercise, there is significant relationship between gender and admission ratio. However, let's now include our third variable department. 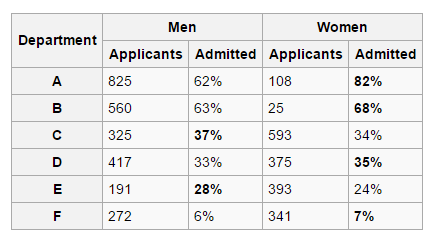 As one can see, when the department is included, the gender bias seems to be reversed and 4 out of 6 departments favour women over men. So again, was there a causal relationship between gender and graduate school admission ratio or is this a correlation? And which variable actually was the lurking variable?