Improved nutrition and healthcare has lead to increased human heights in most societies over the past century. But is this trend also reflected amongst elite athletes? To examine this, we'll be looking at another slice from our Olympic dataset and performing multiple tests.

You have been provided with the athletes dataset containing information about American male Olympic athletes from three years: 1924, 1952, and 2016. You will perform two-sample t-tests to compare the three timepoints, seen in boxplots. Between which times do significant differences exist? As you'll be performing multiple non-independent tests, you will need to perform Bonferroni correction on the results. statsmodels, scipy.stats, and pandas have been loaded for you as sm, stats, and pd. 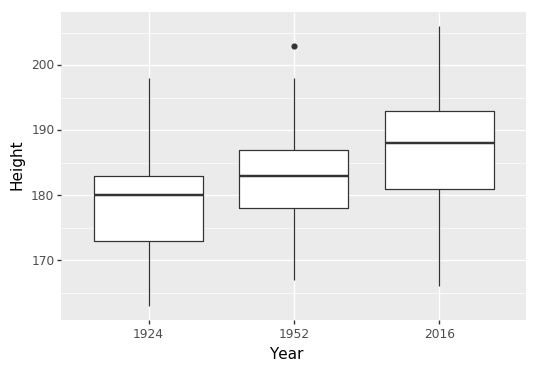