In the last exercise, we calculated the cut-off value for a one-sided significance test. It is however more common to do a two-tailed significance test. If we stick to our significance level of 0.05, we would have to chop this value into two. This means that we get two rejection regions each corresponding to a cumulative probability of 0.025. Let's consider what this means visually: 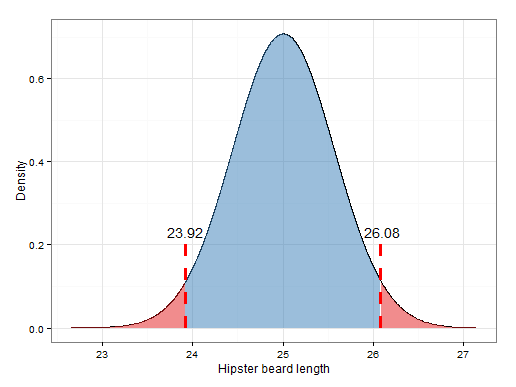 In the above visualization, we have taken as an example the sampling distribution of the beard length of samples of 40 scandinavian hipsters. The mean here is 25 and the standard error is 0.55 round(3.5 / sqrt(40), 2). The red area is considered the rejection region when we are doing a two-tailed hypothesis test. This corresponds to the alternative hypothesis which checks whether the population mean of the beard length of scandinavian hipsters is not equal to 25 millimeters. As you can see the 0.05 probability is divided into two chunks of 0.025.